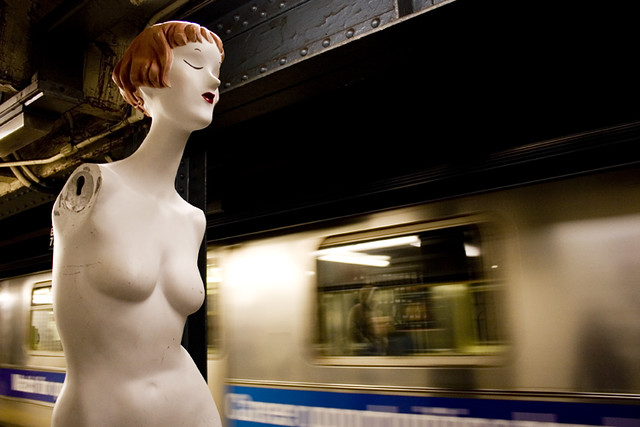 Trains and subways are a strange thing. Very public, but also very impersonal. Sometimes it feels like people forget they’re surrounded by other people on their commute. Trains are hauntingly lonely when they’re empty. A ride on a nearly-empty train at night feels like the beginning of a story.

When I lived in Boston, I rode the late train home every night. It was a good time to think about stuff as the neighborhoods clattered by. I played a game where I would try to guess which of the few passengers would be getting laid that night. Usually, I didn’t think any of us had very good chances.

A Jerk on the Green Line

The train stopped and the doors opened. A guy got on. I glanced up. Jeans, a navy blue hoodie. Red sneakers. Deep brown eyes. Cute, I guess. A wicked look in those eyes, though. I straightened my skirt. It was a little shorter than knee-length, but that skirt sometimes rode up and showed more of my thigh than intended. And the cute guy made me self-conscious.

On the Train by Besos de Cuero

The train pulled into Paris Saint-Lazare and people started getting up and making ready to leave. Not a word was spoken between us. They left and I just sat there for a few moments trying to understand exactly what had happened. I felt like an empty shell. I felt tired but utterly calm. Without shame.

My Late Commute by Aaron Causer

Gently, I placed my hand on his crotch, and felt for his cock. At the same time, my eyes were fixated on his face to see what the reaction would be. It was wrong, I know, probably criminal, but my basic primal urge had got the better of me. For a split second, nothing. But then, his defined, quite feminine lips started to curl up at the sides and the eye closest to me opened slightly.

We must have walked by a hundred people on our way to the station. I am not sure any of them noticed us. If they did they saw a couple who hated one another. Now, silent on the train, me leaning towards The Bronx and Ariel leaning towards Brooklyn, I wondered if our train-mates could see the crumbling relationship in front of them. After the third stop, Ariel finally spoke. “I’m getting off. I want to be alone, I think.”

On the Way Home by Tess MacKenzie

(Ok, this one may or may not qualify as a train story. But I imagined a train station in Boston when I read it. And I like her writing. So it makes the list.)

We’re going home one night, quite late, and we go through an area which is brightly lit, but mostly empty. A train station, perhaps, or perhaps a mall which is closed but which hasn’t yet locked its doors.

Wherever we are, it has a kind of brightly-lit emptiness, an emptiness where everything is so quiet and still that my heels seem startlingly loud as we walk.

So we walk. And turn a corner. And we both stop together, surprised.

“Thanks,” she mumbled, not looking at him.  She righted herself.  Then she felt his big hand on the small of her back.  It rested lightly, testing her.  She knew it didn’t belong on her.  But she liked the feel of his touch.  She didn’t move, didn’t protest, just waited.

One thought on “Subway & Train Erotica”